Co-working is booming, read on to know why 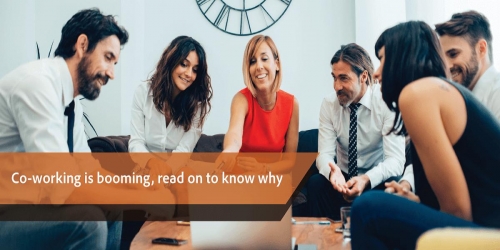 Co-working is booming, read on to know why

Given the emphasis on startup programs in nascent and developed markets like that of Africa, India, Australia, and Singapore, it is easy to see why co-working workspaces are booming all over the world. In India, there is particular emphasis on entrepreneurship and freelancing, with several startups getting established each month. And real estate vendors have been quick to take a note of the fact that both startups and freelancers require a structured workplace to work from and several such vendors have stepped in to create the perfect co-working workplace to meet the current demands for the same.

In places like Mumbai and Bangalore, cooperatives have sprung up where all the overhead costs are shared; some have even pooled their resources to buy the workspace outright, whereas others have opted to go in for the lease format. With over 7000 co-working workspace vendors in play all over the world, it is easy to see that co-working workspace is no longer an aberration but one that is fast becoming a part of our reality.

One of the reasons that co-working is booming is that these workspaces provide the individual members with the freedom and the creative space they need, albeit in a structured format. This enables them to focus and perform better, which is one of the reasons why co-working workspaces outperform other variants, including the “work from home” segment. And of course, being your own boss has its perks like being able to say “no” to projects that make you uncomfortable, or you are not to forced to work on a less paid one. These workspaces place a special emphasis on allowing the individual to work as per his/her preference and apart from projects, this freedom even extends to the time they put in. In other words, those who are a part of a co-working workspace can set the pace themselves, and they are not required to log in. Besides, they can choose whether to work long hours or not. This freedom to choose what to work on, how long to work, and what sort of rates to work on are some of the key cornerstones of any co-working workspace.

Given the upward trend in the number of remote workers and the rising number of “work from home” projects and freelancing segments, combined with the current boom in startups, it is widely expected that the demand for co-working workspace is bound to shoot up in the near term. It is believed that co-working may evolve further, given the increasing and ever changing demand for the same.

This segment is slated to grow further in countries like India, where several flagship programs like “Startup India” which promise government support for such co-working workplaces are blooming. Apart from this, most of the young workforce in India prefers to work with a certain degree of freedom and creativity. In short, these millennials are fast propelling the growth of this segment worldwide. And there’s also the cost factor since co-working can operate like a co-operative, enabling several members to work with each other, to develop and streamline their production & it only stands to reason that they would share in the rent and the overhead cost as well.

The current forecast for this segment is that it is set to grow even further in the near term, especially in countries like India and may soon match up the current growth rate of the startup segment itself.